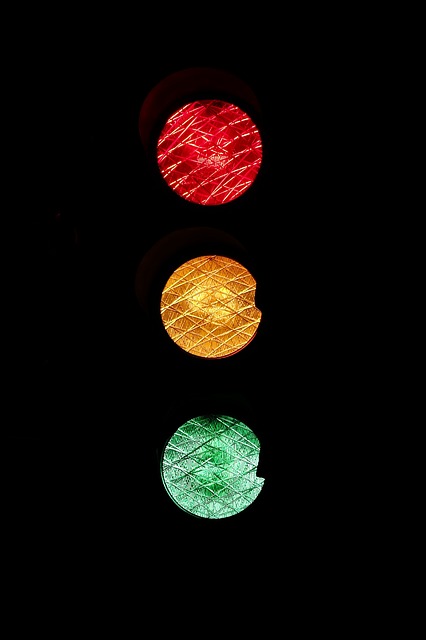 One of the surprising developments in Romania was the pick-up in economic growth after the current account deficit (savings minus investment) had plunged from 4.5 percent of GDP in 2012 to 0.8 percent of GDP in 2013 and then continued to narrow to 0.4 percent of GDP in 2014. It is usually the other way around: the step-up in economic growth coincides with the widening of the savings deficit. No one has come up with a convincing answer, from the savings-investment perspective, to the conundrum why the faster economic growth has coincided with the stabilization of the current account deficit at low levels (2). Many other answers depend on this particular one, including to the question whether in Romania there is room for future monetary policy rate cuts.

In this article, I will first provide a possible explanation for the abrupt narrowing of the current account deficit. Then I will answer the conundrum by showing why the narrowing has been accompanied by the pick-up in economic growth. Finally, I will argue why a potential current account surplus would allow the further lowering of the monetary policy rate.

The reasons behind the reduction of the current account deficit

In a recent study, I have launched the hypothesis that the countries of the world are currently in a process of assuming secondarity to the US as regards the position of net exporter/net importer of financial capital (Croitoru, 2015a). The process of assuming secondarity is conducted by each economic agent deciding it is more prudent to have excess savings in the event of a crisis (3). In this event, a surplus of savings would diminish the costs generated by swift capital outflows, currency depreciation, an abrupt decline in domestic asset prices, banking system weakening, and the flagging domestic demand.

The process explains well why the global surplus of savings "is generated in an increasing number of countries", whereas "the overwhelming part of the global deficit of savings is located in the US", which are far better equipped to accommodate the aforementioned costs (4). This process is highlighted by data in Fig.1, which shows that each crisis has generally added a larger number of new countries (areas) to the group of countries with excess savings, as compared with the number of countries posting a deficit of savings (the Latin American debt crisis of 1982, the global recession of 1991, the Asian crisis of 1997, the Brazilian crisis of 1999, the Argentine crisis of 2002 and the Great Recession of 2008). 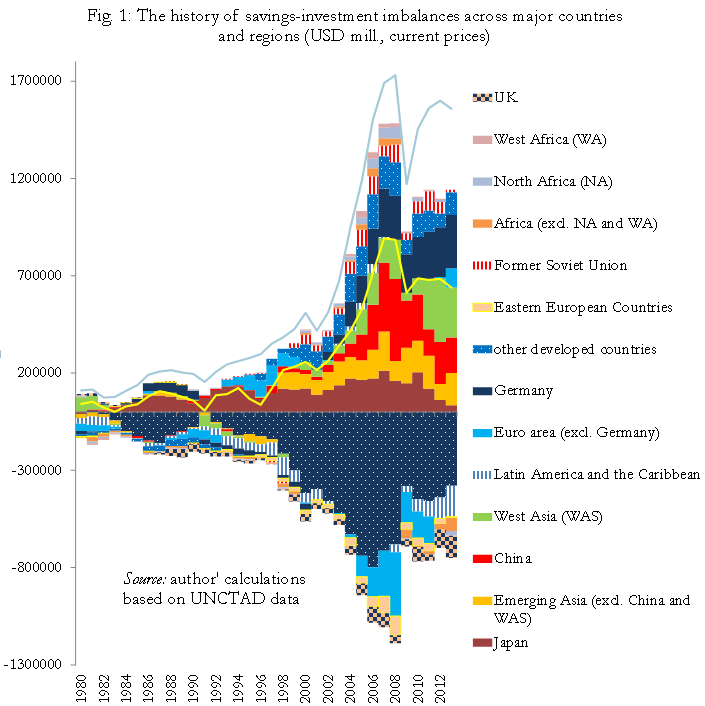 Eastern European countries never joined the group of countries with excess savings after 1990, but they considerably reduced their current account deficits in the aftermath of the 2008 crisis. Romania was no exception either, and one cannot rule out the possibility that, following the 2008 debacle, many economic agents have decided to adopt the excess savings policy. The private sector has already recorded a current account surplus throughout 2009-2014, except for 2012. By contrast, the public sector has posted a deficit, but it has gradually narrowed and – had the government not incurred in 2014 advance expenses for 2015 – the government sector would have boasted a surplus as well.

If the hypothesis of assuming secondarity is correct and Romania is heading towards excess savings, this would have profound implications in many respects. Such implications essentially derive from the fact that a current account deficit allows domestic absorption (demand) to rise without generating severe inflationary pressures, whereas a surplus allows an increase in aggregate demand when domestic demand is weak. In other words, in the latter case, output grows on the back of exports, meaning that it is driven by external demand.

One of the implications of shifting to excess savings is the reduction in the natural rate of interest. Mutatis mutandis, the plunge in the current account deficit in Romania to almost zero was reflected in the lower natural rate of interest. The swift narrowing of the savings deficit suggests that the natural rate has declined at a quick pace as well. In addition, inflation has followed a downward path, largely reflecting the fall in inflation expectations. Hence, it has become necessary for the NBR to cut the monetary policy rate, which was lowered from 5.25 percent in December 2012 to 1.75 percent in May 2015.

It is a fact that the natural rate is not observable, so that it has to be econometrically estimated, which makes its size very uncertain. Thus, it is possible that, during 2013, 2014 and 2015, "the nosedive of the current account deficit, the monetary policy rate cuts and liquidity management" may have resulted in the money market rate running below the natural rate. This would explain why, over the past three years, the economic growth rate has exceeded the potential growth rate, paving the way for the closing of the current negative output gap, maybe even in 2015.

These developments, which explain the conundrum, and the state of demand in developed countries have triggered/will trigger two constraints for monetary policy in Romania: on the one hand, as long as monetary policy rates remain low in the advanced economies, the euro area in particular, "the NBR needs to lower its key rate in order to avoid the appreciation of the domestic currency relative to its equilibrium level". On the other hand, as long as the current GDP growth rate is above potential, leading to a positive output gap, "the NBR might need to raise the policy rate" in order to keep inflation at target, probably starting 2016. This policy dilemma is, de facto, tantamount to losing the monetary policy tool.

The NBR faced such a dilemma during 2006-08. On the one hand, a monetary policy rate hike was warranted at the time by the need to curb the relatively high inflation expectations, whereas on the other hand an interest rate cut was called for by the need to moderate capital inflows, which – while strengthening the domestic currency – were however fuelling inflation expectations. (Popa et al., 2009; Croitoru, 2014).

Nevertheless, this time around, something could be changed. A potential current account surplus (excess savings) could spare monetary policy of such a dilemma and hence of losing the interest rate as a policy tool. When occurring, excess savings would push the natural rate of interest down compared with the current level. If the new level of the natural rate were lower than the actual interest rate, economic growth would be dampened, thus making it possible for the GDP growth rate to fall below potential. In this case, not only that inflation would no longer pick up, but the NBR would have to cut the monetary policy rate in order to keep the growth rate at potential. Thus, the emergence of a surplus of savings would pave the way for further rate cuts by the central bank, in order to avoid the appreciation of the domestic currency beyond the equilibrium level, without overheating the economy.

Maybe the nosedive that the savings deficit took in 2013 is a first step towards validating the hypothesis of secondarity referred to above. If the hypothesis is correct, the second step, namely the occurrence of excess savings, will follow sooner rather than later.

(1) This article is based on the study in Croitoru (2015a) and is a variation focusing on monetary policy of the conclusions presented in the respective study. A version of this article was first published in Romanian on 19 June 2015 at www.hotnews.ro and at http://www.opiniibnr.ro/index.php/macroeconomie/41-paradoxul-romanesc-the-romanian-conundrum-1 on 22 June 2015.

(2) However, solid arguments are provided in Iorga (2014) with regard to the structural changes that enabled the reduction of the current account deficit. Since it is based on profound structural changes, the adjustment is sustainable.

(3) The process of assuming secondarity is consistent with the developments described in Iorga (2014). Secondarity explains the reasons behind the structural adjustments referred to in Iorga (2014) and shows that they might continue. The process may occur through any combination between the change in savings and that in investment resulting in excess of savings. In Romania, the fall in investment has played the leading role in the massive reduction of excess savings (Croitoru, 2015b).

(4) In my study I have shown there are at least four reasons for this: “(i) the US dollar’s status as a reserve currency; (ii) increased labor market flexibility compared with other countries; (iii) the increased freedom, the high sophistication and the depth of the country’s financial markets, which have available adequate instruments, institutions and investor populations; and, last but not least, (iv) very low political risk and very strong property rights.” (Croitoru, 2015a).