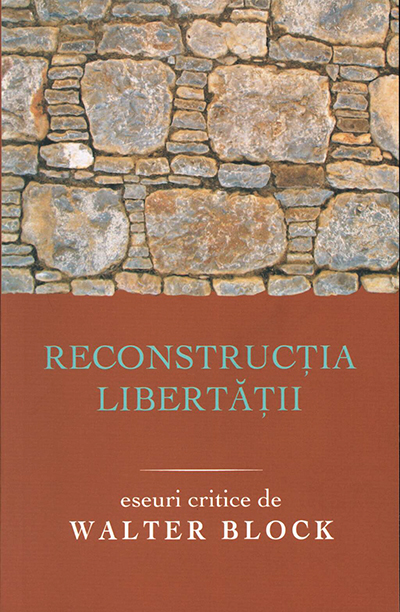 Libertas publishing house put on the market these days a very inciting reading, with Walter Block's “Reconstructing Freedom,” who consistently defends people's right to do whatever they want with themselves and their property, as long as they defend the others right to do the same.

Do you recall the protest of Romanian trade-unions regarding the inequality of treatment between men and women regarding the private pensions pillar recently introduced in Romania?

Well, Block says that this state of affairs is not due to unequal treatment from employers, but to unequal status of men and women inside the family. A married woman earns 40% of her husband's salary, due to her increased duties at home, whereas a single woman earns the same as her male counterparts, Block says.

As for the “guilds” set up by professionals like notaries, fiscal consultants, or taxi drivers alike, Block says the legislation they want is designed to enforce a privileged access to their income, thus protecting the financial interests of the guild members, and not those of the public they claim to serve.

Another hot topic of the day in Romania is the one regarding the prices set by hypermarkets to producers, to which some of Block's remarks may apply: “selling at prices lower than your competition is, at first sight, proof of unfair commercial practice; selling at prices higher than your competition – is proof of monopolistic position; selling at the same prices with all others – is proof of market operators colluding into price fixing.”

As Romanian drivers are constantly discontent with the quality of the roads they travel on, Block may have a word of wisdom for them too: roads' privatization. He brings on the example of private air flight companies, which understand that the safety of their service is the highest on the list of demands customers make from them. Hence, Block says that private road owners will be most interested to cater to the road users concern for safety and enforce rules and practices to that effect, as they would restrict access of dangerous vehicles more efficiently than government agencies.

As the Romanian government expanded its Redeem Program, from old cars to old fridges and vacuum cleaners, I wonder if it could not extend it to communist time economics books, to be exchanged to market economy books of economics ?!